Kerry Marsh of Crystal Discoveries has been a Certified Crystal Healer since 2009, and has been facilitating Crystal Healing Workshops since 2010.

Kerry is an Approved Training Provider with IICT (International Institute for Complimentary Therapies).

Kerry is a Qualified Astrologer, and in 2012 was awarded a Diploma of Astrology issued by The Federation of Australian Astrologers (Dip Astro (FAA) )

I have been “playing” with pretty rocks for almost as long as I can remember -before during and since they have become popular. I have experienced a lot of success with crystal healings – both with people and with animals. Below is a case study that was published in the book “Crystals” by Rachelle Charman. It is one example of just how powerful crystals can be, and how they can compliment the conventional world of medicine.

I share my passion for crystal healings with both people and animals, and have witnessed the amazing healing power of crystals first hand. None as dramatic as with my Labrador, Ebony. 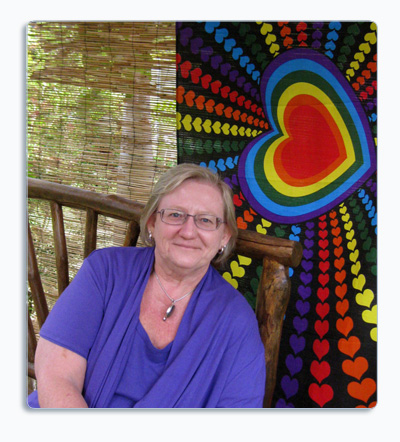 She was 7 years old when she tore her cruciate ligament. She underwent surgery and had an artificial ligament inserted. Following the surgery she experienced immense pain in the back right leg. In order to reduce the pain she was experiencing, as well as stimulate bone and ligament growth, I used a combination of crystals including malachite, haematite and tiger’s eye in conjunction with traditional veterinarian prescribed medication.

The crystals aided her recovery significantly as her limping and swelling was greatly reduced, than it might have otherwise been. Weather changes cause ongoing aggravation to this leg and I regularly maintain treatment for pain and arthritis with a regime of various crystals.

During post operative recovery, a combination of anxiety and confinement left her with chronic cystitis and continual bladder infections. A range of antibiotics temporarily cleared the problem, only to find the infections would reoccur after a number of weeks, and sometimes within a few days. The situation was quite serious, resulting in a complete shutdown of her bladder and complete loss of bladder control.

Her condition was so severe that her annual vaccination was postponed due to a shortened life expectancy. A crystal combination of prehnite and golden labradorite aided in the eventual recovery from these ongoing inflammations, in conjunction with prescribed veterinarian medications.

Recovery went so well, that she was able to have her vaccination within a few months of treatment.